Todd McFarlane will be attending New York Comic Con this year. Check out where you can find him in the Big Apple, below. Get your tickets here. Thursday, October 5th - Sunday, October 8th Visit McFarlane Toys’ display in Diamond Booth 1836 – check ou

McFarlane Toys is in Las Vegas once again to display this years' hottest action figures and construction sets for the GameStop Expo 2017! See some highlights from our show floor. DESTINY BORDERLANDS STRANGER THINGS RICK AND MORTY

Todd McFarlane and McFarlane Toys will be making a one day appearance and this years' Star Trek Las Vegas Convention! (Ticket information, here) Here are the details: August 5th, 2017 10 AM : Panel - Boldly Going There with Todd McFarlane Location: De

First Look at Prototypes on Display at #SDCC17!

San Diego Comic Con kicks off tonight for preview night! If you're going to the show, you can find McFarlane Toys on display and check out Todd McFarlane's schedule here. If you're enjoying the entertainment from the comfort of your couch... you're in luck! He

Destiny Figures On Display at the Destiny 2 Gameplay Premiere

All of our upcoming Destiny action figures were on display at the Destiny 2 Gameplay Premiere event! For live updates, check out our Instagram stories. PRE-ORDER UPCOMING DESTINY FIGURES AND ROLE PLAY ITEMS VAULT OF GLASS TITAN

Todd McFarlane confirmed he will be attending the Calgary Comic and Entertainment Expo this year! For more information, click here. To buy tickets, click here. See his full schedule, below. Friday, April 28th 11:15 - 11:45 AM: Opening Ceremonies

International New York Toy Fair kicks off today, where we will be revealing some of the years' hottest new brands, figures, construction sets and more! If you've been following along, we've shared some teasers (some of you were really good at guessing!)...

Todd McFarlane is celebrating the 25th Anniversary of Image Comics with his first appearance EVER at Emerald City Con, Seattle, WA. Todd will be joined by other Image Creators and artists at the show for signings, panels and special giveaways. We are still wor

If you're going to this years' New York Comic Con, here's where you can get an in-person look at some of our hottest product hitting store shelves this Fall. We'll have a dedicated McFarlane Toys display in the Diamond Comics booth #1838. McFarla 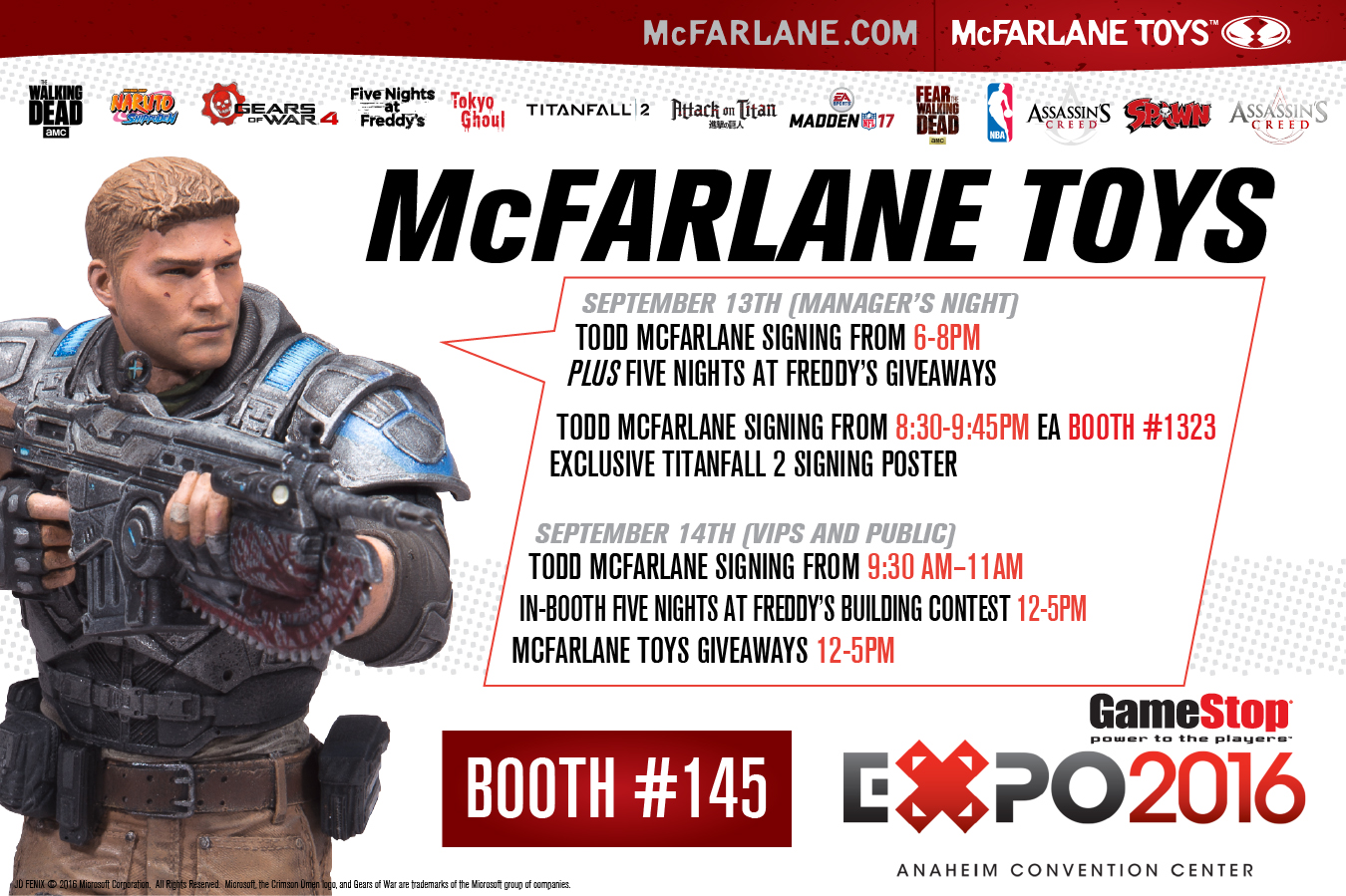 McFarlane Toys at the GameStop Expo 2016

We're in Anaheim for the GameStop Expo showcasing new figures, construction sets and statues! Here's a first look at our booth... FIVE NIGHTS AT FREDDY'S TITANFALL NARUTO TOKYO GHOUL ATTACK ON TITAN AS

Todd McFarlane and McFarlane Toys are planning their next event at the GameStop Expo this September! Stop by the McFarlane Toys booth #145 in the Anaheim Convention Center to see the action figures and construction sets from this years' hottest brands in ente

Yahoo.com – These Comic-Con Toys Will Make You Wish You Were in San Diego